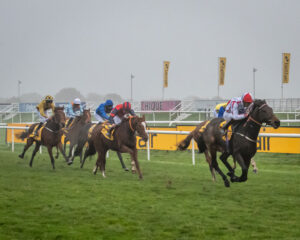 ON TO VICTORY DOES THE TALKING TO WIN THE NOVEMBER HANDICAP

On To Victory in his three Flat runs since 2017 has put up excellent performances at York, Ascot and Haydock, but he surpassed those by winning Saturday’s November Handicap at Doncaster under a brilliant ride from James Doyle.  James had ridden him at Haydock in a controversial race with the long odds-on favourite, Goshen, running below form and was caught flat footed when the winner got first run.  On To Victory was unlucky not to win that race, but it may have been a blessing in disguise as the handicapper left him alone.
Saturday’s race did not go one hundred percent according to plan, as he was slower  away than intended but that turned out in his favour, because the leaders which included most of the fancied horses went very hard up front.  It was very clear just before the two marker when On To Victory by our calculations, passed about 15 horses in the space of 150yds, that victory was going to be a formality.  James Doyle confirmed in his post race interview that there was more in the locker.

Alan King and all his staff at Barbury Castle must be congratulated with the precision planning to win this race, which had narrowly eluded us some years back two years running with The Betchworth Kid filling the runner-up spot.  On To Victory will now resume his novice hurdling career and on the balance of last year’s performances, which were a little bit hit and miss,  he is now a far better horse in his work at home and the future looks exciting.

I would like to thank one of our owners, Pat Cornell, who was able to be at Doncaster to represent the syndicate and post-race interview with James Doyle – see below