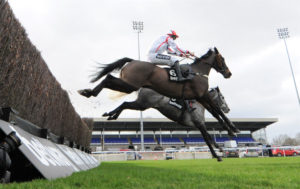 WHO DARES WINS LIVES UP TO HIS NAME

Who Dares Wins gave Alan King’s team at Barbury Castle and most important of all, Tom Cannon, a wonderful day at Kempton Saturday 22nd February with a great victory in the Grade 2 Pendil Novices’ Chase.  Tom Cannon, who was understudy to Wayne Hutchinson before Wayne’s untimely retirement, rode a treble on the day, including another winner for Alan King in Mythical Clouds.  Who Dares Wins was slagged in some quarters for his performance at Plumpton, where he was denied by a small margin having met trouble in running and being hampered by a stricken horse in ground that was terrible.   His performance at level weights when narrowly beaten only half a length, despite getting in close at the last behind Master Tommytucker, was overlooked by most racing pundits and I made no secret of telling everybody I met that 8/1 and 10/1 was far too big a price for this race at Kempton.
Master Tommytucker unfortunately made a dreadful mistake and paid the penalty at the fourth last, like he had done on the course last time, which left Who Dares Wins and Tom Cannon in front earlier than intended.  They were headed between the last two by Briony Frost on Southfield Stone, but as game as ever, Who Dares Wins put in a brilliant jump at the last to win by a hard fought three-parts of a length, with the third horse over 9 lengths further back.  This was a tremendous performance and on examining the race fence by fence, he put in an immaculate round of jumping.

We have had success at the Cheltenham Festival in the past and many placed horses and Who Dares Wins has booked his ticket for either the Ultima Handicap on the first day Tuesday 10th March or the Royal Sun Alliance Chase on the Wednesday.

Who Dares Wins is a wonderful horse and continues to give his owners exciting times.