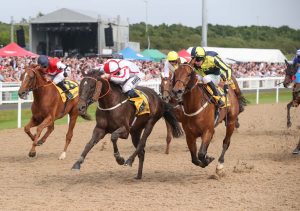 Who Dares Wins  had been brought on with this race in mind since finishing second in the Chester Cup (a race in which he also finished third and fourth in the last 2 years as well) and everything went to plan for an excellent and well deserved win.  Tom Marquand gave him a

fabulous ride, holding a good position in midfield before making a move 2 out and coming with a storming run to get up on the line winning by a head.  This likable horse is owned by a small group of really keen racing enthusiasts and he has done them proud having now won 9 races and been placed on many occasions in some of the top races, both on the flat and over jumps.  His earnings are now in excess of £286,000 and Tom Marquand has ridden him to victory 5 times.

under the care of Richard Hannon.  He progressed to Alan King for a dual-purpose career and soon made his mark over hurdles winning two black type races, the prestigious Summit Hurdle at Doncaster by a wide margin and also the Listed Gerry Fielden Hurdle at Newbury.  He has been in the money at two Cheltenham Festivals and also made the numbers at Aintree and placed at Royal Ascot.  He won the £50,000 Cesarewitch Trial beating his then stable companion Coeur de Lyon, who incidentally was eliminated from Saturday’s Northumberland Plate in the ballot but finished third in the consolation Northumberland Vase.  Who Dares Wins seems as good as ever this season backing up an excellent come-back run after 10 months off when third at Newbury before being an exciting second in the Chester Cup.